I had a similar issue with a champion who held two belts, to defend them someone needs to be within a certain ranking, not injured or already have a fight booked. How many weeks have passed since he couldn’t find a fight? Check the rankings for all 3 orgs, and see if anyone is elegible, then check they aren’t injured or have a fight scheduled.
Hope this helps

It happens all the time with undisputed champions. You will need to vacate belts to get a fight. Or wait until someone meets all the ranking criteria. But depending on your in game rankings that could take a long time (if at all).

Would still love to see the rankings adjusted to top 3, 5 and 7 to make it easier for undisputed fights.

Top 5 will not make a difference unless they meet all the rankings criteria. So someone will need to be top 2, top 3 and top 5 in the 3 organisations to become an undisputed challenger.

We are looking at ways for undisputed champs to have more leeway in choosing opponents which we believe should be the case (for multi belt holders) rather than making it easier to become the undisputed champ which we feel should be a major achievement.

If that makes sense ?

Check the rankings, you’ll probably have someone there that only needs you to vacate one belt so they are eligible to fight you, it tells you under fight what ranking they have to be. You have to do this a lot with unified champs, would be good if there was a way around it. Oh and you’ll soon be able to fight for that belt you vacated again so long as you keep winning 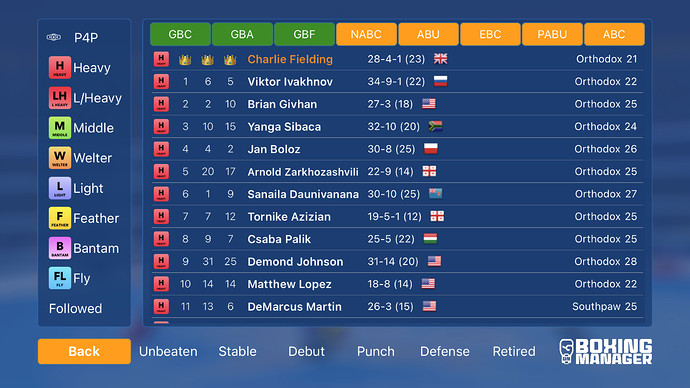 You will have to vacate the GBF then you should be able to fight Brian Givhan as he meets criteria for other 2 belts.

Yeah no one is eligible for an undisputed fight there. As advised above, you will need someone to meet all the criteria of all 3 organisations.

In real life most examples we believe would result in a belt being vacated rather titles fights being made outside of an organisation’s rules. As at the moment it will be interesting to see if the WBO insist Joshua fight Usyk in which case he will obviously dump that belt and make the fight with Fury.

Yeah the current situation with the WBO shows the game is working similar to real life in these situations. Annoying in both instances though

I think opponents challenging you is necessary in this game as well. Maybe sending a message and having a yes or no option to add some spice. Gives opportunities for undefeated fighters in the top 20 to prove their worth against the Champs.

We have been waiting for a few features to enable this and it will be here before Xmas (hopefully!!) 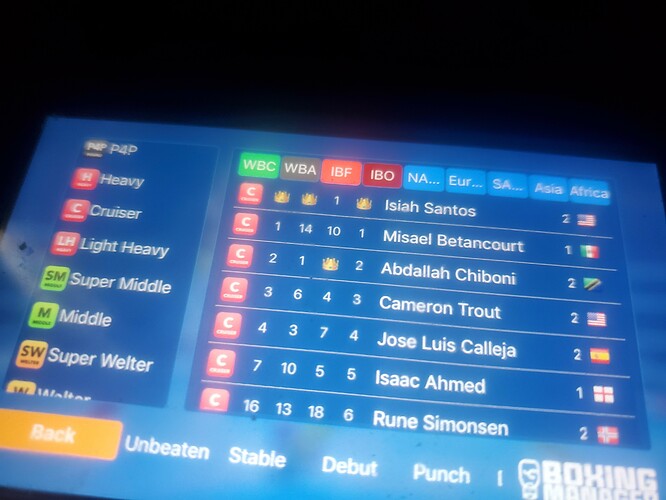 It’s hard to see from the photo precisely but it looks like he doesn’t meet the ranking eligibility.

We also accept that in the four belt world that this is now unnecessarily complex and we are looking at improving this.

Maybe you could control/arrange certain fights? In real life oftentimes there are “qualifying fights” for a certain title shot. This could “lock in” a future fight.

I’ve had a problem with potential opponents that drop one position when recovering from an injury from a 2 2 3 5 challenger that moved him to 3 2 3 5 making him ineligible. If a fight between the new #2 and this fighter would give a title shot to the winner.

Another option that could be added is the ability to arrange fights with injured fighters, but adding the recovery time in the total time before the fight.

The idea is not to diminish the “fight quality”; it is to let the promoter create the conditions that a massive pot fight to happen.

We have addressed some of this in the undisputed champ thread.

It is just that the one-size fits all approach to title fights, now that we’ve reached four world titles, isn’t as good as it was when there was just one or even three belts. The fourth title addition a couple of months back makes the old style of world title fight creation not work. We will be introducing Mandatory defences very shortly (we are currently coding) and this will change things considerably. Another thing that makes it too easy is that manage…