A suggestion re the Title banner

I have a wee suggestion re the title banner, particularly for champions who move up weight. I’m sure I’m not the only one who finds it really irritating that it says “former ***** champion” but lists the current weight instead of the weight the belts were won at.

I understand that it’s not a simple thing and needs a lot of thought and work due to the absurd amount of variations there are.

As a work around, what if it just says “former World Champion”. Very simple but preferable to incorrect info being displayed.

Or even if it’s not too much work, add ‘unified’ or ‘undisputed’ where applicable.

We have something up our sleeves for this when we do the next big release in next week or two :)

Good stuff. And here was me trying to make it easy for you 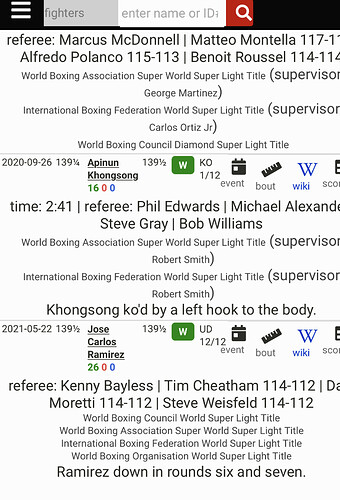 image1125×1654 331 KB
One thing I was thinking that would be good would be to have the fighters record screen a bit like the photo here on boxrec not exactly the same and not even with as much information but you could even have the scores of fights and have the titles as well but you could shorten it to like wbc wba and just have them next to one another instead of on top of one another like the titles in the photo to save space and you could even have ebu for when you’re the ebu champion if any of that makes sense😂
1 Like
TartanTornado 4 July 2021 20:29 #5

That sort of summary view is cool.

Good for iPad…. Not sure it would work as well on phone but def very cool:)

Let us work our way through the next version or so. We will be updating much of the interface as we go along so it really is a golden great time to be making suggestions.