How many fighters do you guys own?

I own two full gyms with 24 people each and then another gym with just 4 people. I’m starting to think I took on too many fighters lol. How many fighters do you guys manage?

I’ve only got one gym with 16 fighters I’ve never really seen the point in making another gym once you get your original gym to max reputation.

Only got 9 in my current game. I generally like having around 8 - 10 boxers. I find any more and I kind of care less about them. With a small amount their results and stories seem to mean more.

Totally agree with this.
Find that the more we play the more we get smaller gyms together and really intense stories and situations evolve and play out quicker. 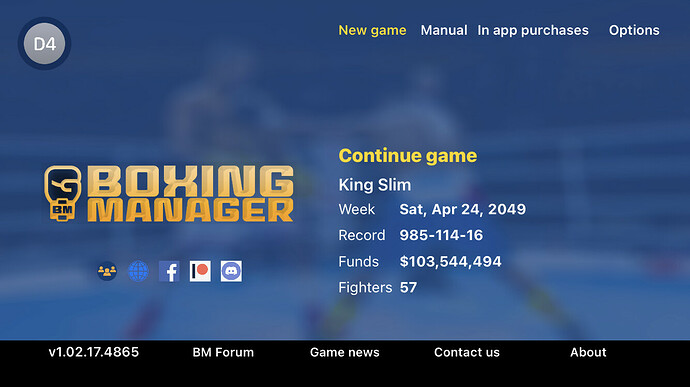 I’m trying to down size believe it or not lol

I ended up in a similar position and you lose the passion for each fighter and it just becomes repetitive. I do think the fact we can add our own names - giving the fighter an identity - has helped with that. I go 24 max and even that can feel like too much

I think it will help once boxers have some kind of profile page. Where you can see there honours etc. At the moment you lose track of their successes when you have loads of boxers.

These are good points.
The extension of depth for fighters is key and much of what’s coming in the first half of this year will hopefully address the ongoing connection with fighters. Weight changes will be part of that and more.
And yes @TartanTornado the current thing will (hopefully) once and for all be fixed

With regards to the banner, I totally get it’s messy due to the amount of possible combinations of titles. I would just remove the weight. So you have something like:

Former 2 weight world champions etc for those that have moved up multiple weights.

My visions of the profile page are similar.

The profile page is the way forward with tons of extra stuff on there.

Yeah that will be the winner. That would likely stop me from starting a new game every other week

21 at the moment ! wanted to stop at 20 until some of my old heads retire but a guy from MALI just popped up with plenty of 20s and only 19… couldn’t turn that down considering you don’t see many world champs from Mali