If you could make one change or addition

What would it be?

There are loads I would like done with the game but if I could only choose 1 it would be to scrap the UK as a nation and add Scotland, England, Wales and NI (yeah Iv mentioned it once or twice before

). As much as I really love this game, it annoys me immensely that I can’t emulate my hero’s Ken Buchanan or Josh Taylor.

I imagine this wouldn’t bother English as much as they are often billed as British anyway. But Scots, Welsh etc are always billed as their individual nation. Also means we are missing out on loads of big potential Scotland v England etc match ups. Come on Mike, let’s get this one done mate

We really do hear you on this one.

It doesn’t have to affect the gyms. The UK option can stay the same - players can open a gym in the UK. Just randomly change the flags of fighters within the UK so that some have England, Scotland etc.

DDDs suggestion is along the lines of what I was thinking. Ben Davison a good example. He has a gym in England but 2 of his top boxers are Scots Josh Taylor and Lee McGregor.

So you would still have a UK gym. Just the fighters you are offered have their actual nationality listed.

One change I would like is getting vacant title fight instead of a fighter just getting gave a title if the champion vacates. You could do something like if the title is vacant and you have a fighter with a high enough rank you could match him with another fighter with a high rank and have an option to apply to make it for the vacant title or something along those lines

I like this one. It’s kind of annoying when you get lots former champions without a title win.

There are loads I would like done with the game but if I could only choose 1 it would be to scrap the UK as a nation and add Scotland, England, Wales and NI (yeah Iv mentioned it once or twice before

). As much as I really love this game, it annoys me immensely that I can’t emulate my hero’s Ken Buchanan or Josh Taylor.

How about this then…?

The flag changes will be liked by people I think.

Now on the beta…

Damn, that’s awesome mate. Guess I’m starting a new game and playing til the wee hours! Thanks for pushing that through

And here he is, (probably) the first ever Scottish heavyweight champion in the game… 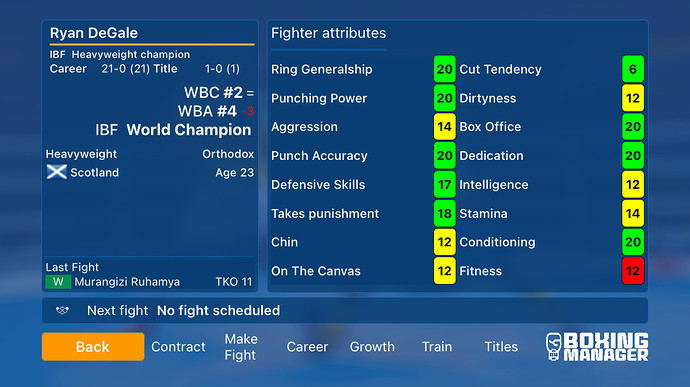 That feels about right. 20 lifetimes before one of those actually appears

His chin was always going to be an issue though. Had 10 defences and was undisputed. Now gets knocked out by bums

That’s good work to do that!
What sort of purses was he getting when undisputed?

Mmm, wasn’t really paying attention. I would estimate that he has made me around 250M.

Actually just had a look at his fights. Around 30M a fight when undisputed. 10 - 15M while he was IBF champ.

Iv noticed it’s generally harder to get title fights. Even if ranked no 1 by a federation. I assume this is due to rematches going on. I like this. I have a stable of 10 good boxers, and only 2 are champions (and one ex champ). @ week 350.

During testing have seen some amazing title fight trilogies.

Have to say I think this is the best the game has been.

Is a hall of fame still planned? I feel like the game is creating what feels more like legends now. Proper rivalry’s and like you said, trilogy’s etc. Perfect for a hall or fame.