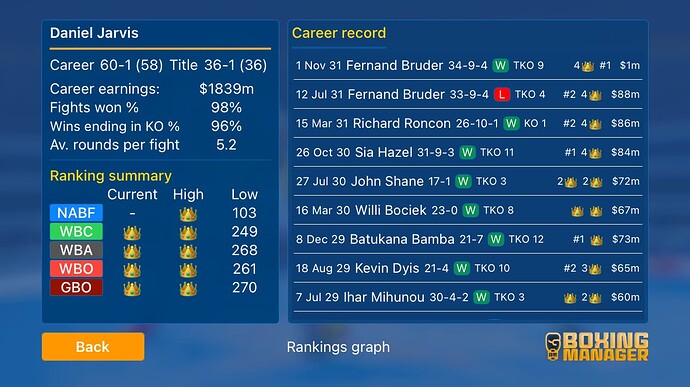 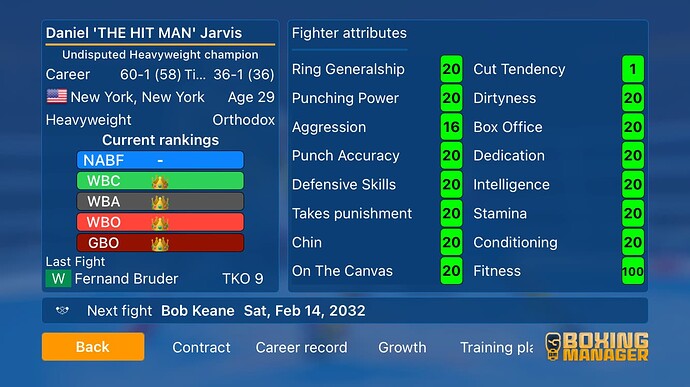 That’s the beauty of boxing. Expect the unexpected. If I remember rightly Ruiz jr was 30/1 odds to ko Joshua. So if you put that in game percentage he would have probably had 10-20% chance of winning.

Because you’re guy has had tons of fights and we do try to make it as realistic as possible.
Fights age fighters.

This is actually a question of whether we explicitly show the ageing of a fighter in the attributes. We haven’t (obviously) but we can and it’s something we actively discussed a lot by team.

Personally I would like the stats to decline on screen if they have behind the scenes, but that they should only change immediately after fights

It makes sense to me that you would only really know where a fighter was after seeing him in a bout, rather than it being a gradual deterioration

We tend to agree.
We show a very small number of changes in real time there are lots that are applied to the fighter’s ratings. We will look again at this.

And having looked quickly again and can see the reason why (it’s to do with how the in game contract values work at various points). Let us think about this. There’s always a way

Huge upsets happen in the real world so of course they should also happen in this game too. Boxings like that. 1 punch can end a fight regardless of stats.