The beta that appeared today has a reduction in the rankings as discussed above.

Aw ffs, Iv only just got my first champion in my current game! Going to have to scrap it though to try out this scenario. Game save slots needed…

Man since the latest update I am just losing every fighter I’ve got after a long term deal. I’m almost definitely doing something wrong but not sure what? I think they are all leaving because I’m not hitting the expected ranking but I’m not sure how to meet the expectations on some contracts I have to go up 120+ ranks in 6 fights is that even doable? Must be if it is on offer but def not the way I’ve been playing haha

You should be able to move 20+ places per ranking!

That said we are looking at dialling down the requirements a little for the next update that’s out this week (hopefully).

I thought I was the only one going through this recently haha.I was so sad losing my best boxers trying to climb up…Glad this has been addressed!

New beta has it now. Update is with Apple to approve.

Respectfully, Since I am new still I don’t quite understand what I’m doing wrong.But as of right now, I feel that I cannot play the game at the moment because I really don’t want to lose my fightershaha.If it is something,I hope it’s soon. 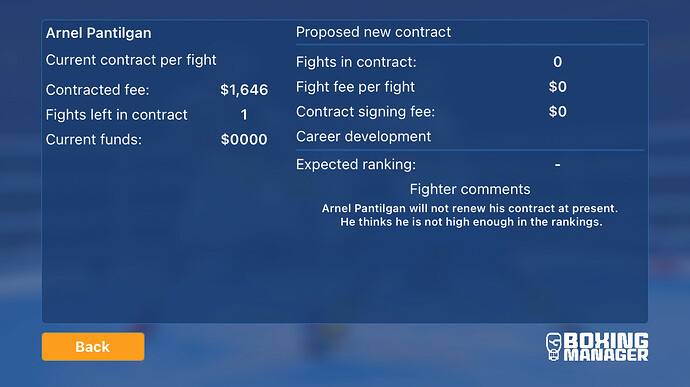 thought I was the only one going through this recently haha.I was so sad losing my best boxers trying to climb up…Glad this has been addressed!

Weirdly when we introduced it we got the sense it was too easy. 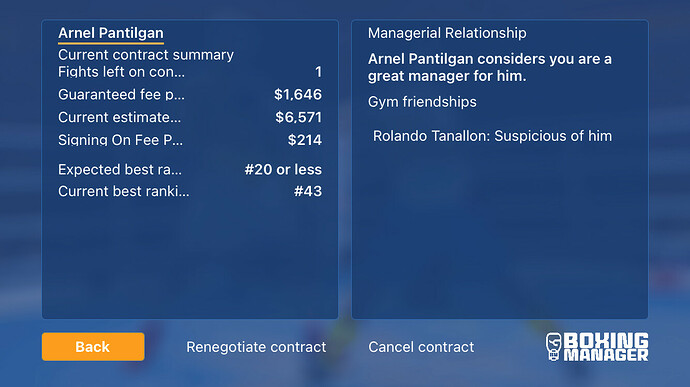 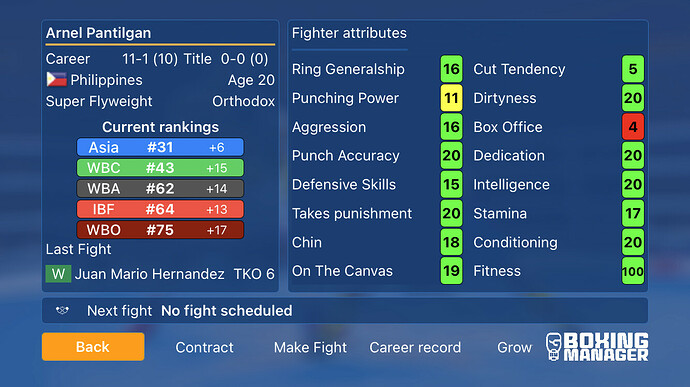 I’ve been having this same problem. All my good fighters have very aggressive expectations and I’ve been losing them.

The current system forces you to focus almost on a single organization’s ranking, but it gets to a point where you can’t keep getting 20 spot jumps as you lag in other rankings. Waiting doesn’t work either and you get in a problem with fighters wanting to fight.

The other thing that matters is that the calculation of 20 spots per fight is wrong. They way the contracting is set up is that you have the total length of the contract in fights minus one. I might’ve lost less fighters if I had the full contract length to reach the goal.

It would be amazing if you could renegotiate at the end as if some ROFR rights were included.

That’s good to hear. We will continue to look at the data and see how well (or not) that aligns with the feedback. As ever the players guide us to making the best possible game.

It would be easier to understand loyalty if the fighters had short and long term career goals. Could include making money, specific belts, number of defenses, wanting to fight in front of a large crowd, fighting a particular rival, etc. The goals could change as time goes on. - and be linked to personality (or reflect personality). Meeting or exceeding expectations could contribute to loyalty.