As ever we’re busy and a large set of feature bumps and fixes coming over next 5-10 days including some major new changes to the way the game scenario is set up at the start of a new game.

These will be part of the new play/beta test version on TestFlight in coming days.

If people do not want to have a radical new experience then make sure your apps to not automatically update via TestFlight until we have the functionality in coming days to play both the new and current starting scenario/setup.

without us optimising it with players

Not sure what this part means? Do you mean without other human players to play against online?

Any plans for an online game where players can play against each other?

Any plans for an online game where players can play against each other?

Yes. But not for a “while”. It’s in early planning stage

Awesome, been looking forward to this update. Will start a new game and see how it goes.

It needs lots of play testing and suggestions but we think it sets up more playability and more opportunities for us to create better achievements and challenges for players.

Little bit of feedback on this update. Took me to week 150 to win my first belt. Which feels about right to me. I’m sitting on 2M at this stage with my gym updated to 10 and maximum facilities.

Games playing great. Not came across any issues at all really. Well apart from losing money on the one rookie I signed but I’m assuming that’s deliberate as his stats are good.

May have spoken a bit too soon. Suddenly none of my boxers will sign new contracts (well 3 in a row so far). Iv now lost 2 of my best fighters. And my only champion is now not signing a contract either. Is this deliberate? 2 of these were my starting 6 boxers.

Seems to have been after I updated the latest contract update.

Interested if this is a bug or by design. Don’t really want to continue my current game as now losing all the boxers I have spent in game years training.

Let us investigate. Would concur its feeling good.

Lets us take a look.

Can you send a screenshot of the guys who won’t sign. Their contract screens in particular.

Was working great before I downloaded the contract update. To be honest it’s completely killed my current game. I feel like the McGuigans 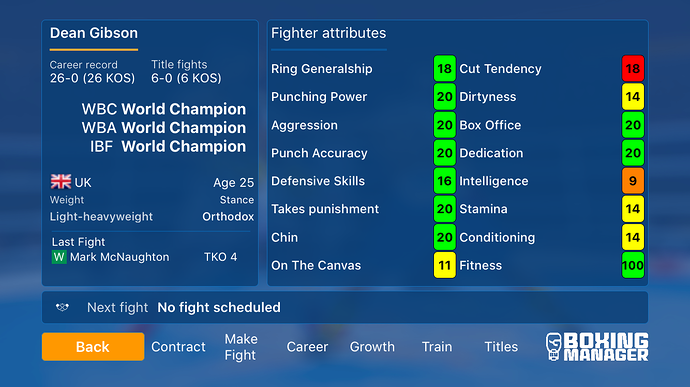 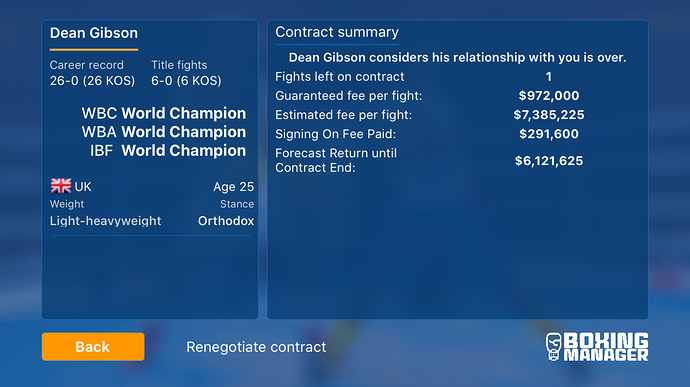 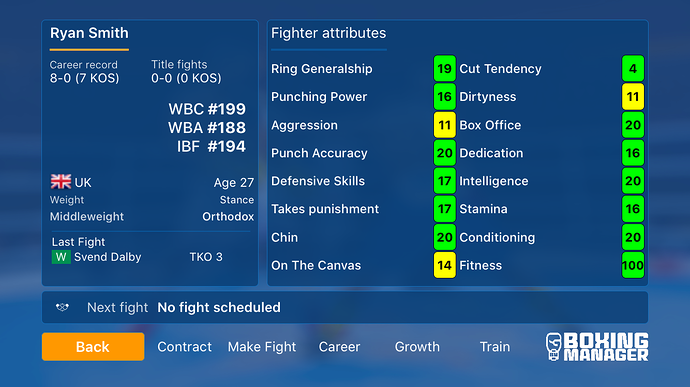 Sorry. That sucks. We understand.
We are looking now.

Ha it’s no big deal. Whole point of Beta is to catch these things huh.

Gibson is one of my starter boxers. 2 weight champion. He was signing Contracts no problem before the update. 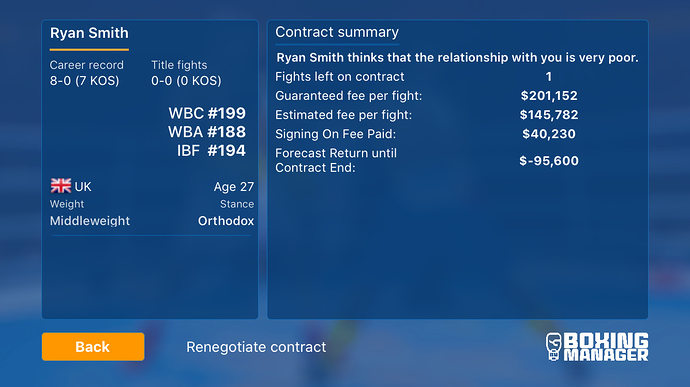 Ok thanks,. Weird. We are seeing people sign here.

There’ll be a reason and we will fix it today.

We assume there was no reason Dean Gibson fell out with you so badly?