My first champion in my current game lost his middleweight title. Next fight he lost 4.4M. I’m now left with 700k in the bank. He has 4 fights left on his contract. So basically it’s game over for me. If I let him fight it bankrupts me. If I don’t, he sues me and bankrupts me. Game over.

Is this intended? Hugely disappointed the game has reverted back to this if so. Game breaking in my opinion. Especially since you can’t release any boxers.

I noticed something as well. Started new game on iPad (latest update). Started with just one boxer, great prospect, got him 14-0 light-heavy, no gym upgrades, and he had 1 fight left on his contract and I could challenge for a belt. I couldn’t afford his contract renewal, he lost money all the way through and I was left with 10k from 500k over his fights.

Basically I was bankrupt and never lost any bouts, all bouts said I would profit and they didn’t, I didn’t spend any money. I do have some screenshots but they are at home on the iPad and don’t really show any detail of reasons why (as far as I can tell).

I then continued my week 2000 odd save on phone and lost a fortune, even on new contracts. Was a good job I had 2.8 billion on that game

Just seems the finance mechanism is definitely off somehow.

It’s probably fine later on in the game when you have billions. But I always start a new game when a new version drops. And it’s completely game breaking. Anyone will be in the same boat when they win their first title. Hugely disappointing. Especially since it was like this before and was changed.

Sorry I hadn’t read your message properly there. Too pissed off at a good game save being ruined

. Yeah I had that similar issue as well but it was because my contracts all expired at different times. Weird that issue happened with just one boxer. The money made at the end of the contract should have brought you back into the red.

Different issues but it’s seems finances need looked at. I’m all for a challenge but it’s too cheap going bankrupt if you haven’t spent a penny or just lost a title fight.

I’d say it’s more realistic though if you sign a big name fighter and keep renewing the contract but you haven’t got a lot of money if he loses course you’ll lose lots. you’d have to be more careful signing on fighters like that with limited amount of money

Ok let us take a look at this. We haven’t had that experience when losing.
We are just working on an update that allows for contract sale/trade…

As ever when we get the feedback we go and investigate and fix quick if there’s a problem.

Massively disagree. If a fighter loses a title fight there is no way he gets the same pay for his next fight. It’s done on a fight to fight basis in real life. Look at how long AJ Tyson have been negotiating. I will lose 20M for my middleweights next 4 fights. That just doesn’t happen. 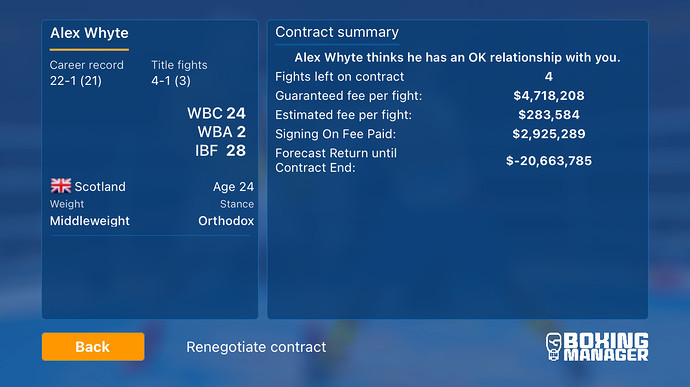 Plus this wasn’t signing a big name fighter. This was one of my starter fighters.

I’m curious, have you started a new game or are you basing this opinion on already having a huge bank balance? I’m testing by starting a new game. And it’s now completely broken. Iv tried to play on. But even with one of my other fighters becoming a champion I can’t recover from losing 5M a fight.

There is also the same issue that happened when this was an issue before, in that you now can never build up enough xp to attribute stat points. As you can only ever offer the lowest contact to champions. (And if they lose they likely won’t re-sign). Damn, terrible update in my opinion.

I am on week 400ish now. I got lucky with a heavyweight at start and not had any money issues. Went bankrupt game before though. I have 18 boxers and I have noticed that I only ever make money off 3 or 4 or them. Some fighters have had 15ish fights and never lost. But they never make me money. If my heavyweight wasn’t making £20-£35 mill a fight I would be bankrupt.

There was definitely an issue with too much money in the game. It was too easy for sure. Horrible route it has went down though. Personally I thought the way forward was to have things to spend money on. More expensive gym updates, buy boxers for huge money, that kind of thing. Kind of gutted after the amazing updates we got recently.

Just think it needs a little tweak. I feel your frustration though. My last game took me hours to a decent fighter. Got a flyweight and middleweight. The flyweight was a beast but got title with middle weight. Then has similar experience as you had lost flyweight then went bankrupt. It’s seems if you don’t get a heavyweight or light heavyweight at the start and with a 10-12 fight contract then you have no chance.

Alright mate, sorry if I’m being a dick

. Just love this game so don’t want it broke

Man I have 3 great fighters (my starter ones) one ex champ, one a world champ and one a European champ. But I’m losing so much money with that ex champ that I’m not going to be able offer new contacts to anyone

. But hey, this is what beta is for. Just worried if this is by design as it doesn’t work early in the game.

It’s a pain but am sure I read on here that you love the start of game? You will be having time of your life.

other thing I have noticed is it’s Jared to establish a gym. There seems to be a lot less rookies coming through. Had gyms usa and Mexico for 3-4 years. Gyms are best they can be and have 3 average fighters.

Ha, yeah I normally love the early stages of the game. Why I have no issues starting a new game each time. Plus i think it’s important to test that to see what new players will experience. Losing millions per fight will mean nothing later in a career, most probably won’t even notice. But early on in the game it’s completely game breaking.

Definitely not by design.we are on it.

Delighted to hear that. Was only concerned as obviously this was an issue previously. In IronMike we trust